0800 is free from landlines. For mobile calls, please check with your provider

The Story of Aviva’s Pension Mis-Selling and Compensation Payouts

We hear many horror stories from our clients here at Expert Pension Claims, we are a claims management company. Unfortunately, it’s not uncommon for UK citizens to be mis-sold pensions or financial products, but this one case really stood out for us.

The story was originally reported in The Telegraph newspaper back in 2015, but to this day the story resonates with our team and many UK residents who are seeking mis-sold pension compensation.

The story goes that Aviva, the UK’s biggest insurer, knowingly sold a pension designed for healthy customers to a person who was seriously ill.

Since the case was first reported in 2015, more evidence has emerged to further damage Aviva’s reputation. It was recently reported that the customer told Aviva that she was unwell and had a wide range of chronic health conditions.

According to the case details, Aviva employees were 100% aware that the saver was in poor health, yet still signed her up to annuity. Ultimately, this could have left her with too little income for her day-to-day life and retirement.

The lady, who wishes to remain anonymous, should have been offered a plan suitable to her health – which would have left her much better off. However, she was sold an annuity plan that was not suitable for her circumstances. Unfortunately, this is one of the classic signs of investment mis-selling. 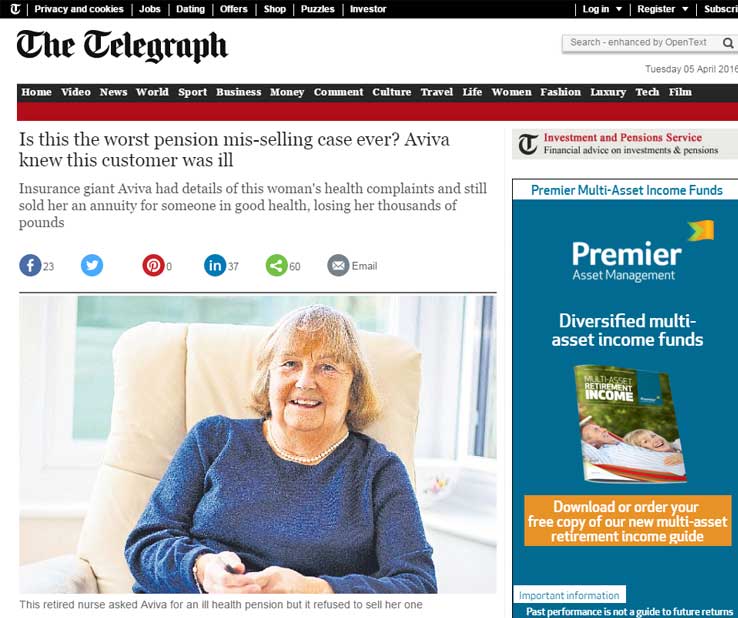 How The Telegraph reported on the mis-selling case in 2015.

Thankfully, Aviva accepted full responsibility for the mis-sold pension and eventually compensated the customer with a significant payout.

The customer in question was eventually compensated for the sum of losses which amounted to a few thousand pounds. This compensation agreement also means that the customer will see an increase in her annual retirement income of 11%.

The Telegraph went on to report and comment on the following:

“After reading about the emerging scandal in these pages late last year, she complained to Aviva in January. She involved her local MP who agreed to write to the firm on her behalf. But Aviva fobbed her off and ultimately rejected her case.”

“The customer had a number of health conditions. These included pseudomonas, a lung condition which causes respiratory problems and other unpleasant symptoms, holes in her lungs (called bronchiectasis), a mild form of cystic fibrosis and hypertension.”

“When the customer finally took her annuity in 2009, she asked again for an enhanced rate owing to her illness, but Aviva refused and sold her an ordinary policy instead. The customer received no financial advice – meaning she would have been reliant on Aviva’s generic “wake up” pack and other communications to outline her various retirement options.”

Here at Expert Pension Claims, we regularly hear similar stories of claims being pushed aside by pension suppliers. You can process a claim yourself and do not need to use a claims management company and if rejected you can use the Financial Ombudsman for free. The above story demonstrates how pension providers can and do handle direct complaints. This is why we recommend seeking the help of a specialist claims company.

If you believe you’ve been mis-sold your pension (maybe you were sold a high-risk investment that wasn’t suitable for you), our claims team can help you claim back what is rightfully yours if your situation shows you have a justified claim. Call our team directly on 0161 968 0768 or fill out a quick claims form and we’ll be in touch shortly.

Our team offer every caller a free and no-obligation consultation in order to see if they have a genuine claim for compensation. It’s really that simple! We’ll take care of the hard work for you, so you can go about your life as normal while the claims process is ongoing.

In the meantime, take a look at our pension guides for more expert insights and advice to help you with your claim.